Wheels on the Bus

Toaster Song
I'm toast in the toaster and I'm getting really hot! (bounce baby on your knees)
Tick, tock, tick, tock, (rock back and forth with baby on your lap)
Up I pop! (lift baby up)

Literacy tip of the week:
Letting your baby hold books and turn pages on their own is a great way to help them learn what books are and how books work.
Posted by Ms. Kelly at 10:44 AM No comments:

Rock, rock, rock your boat, (rock back and forth from foot to foot)
Rock in to and fro.
Watch out! Give a shout!
Into the water you go! (pretend to fall into the water)

Row, row, row your boat, (rowing motions)
Down the jungle stream.
If you see a crocodile,
Don't forget to scream! (scream)

Literacy tip of the week
Rhyme is an important element in children's books and songs. Hearing and repeating two words that sound alike in a story helps teach that words are made up of smaller parts. It will even help your child learn to sound out words as they get older.

Craft:
We worked on our fine motor skills by coloring boats :) 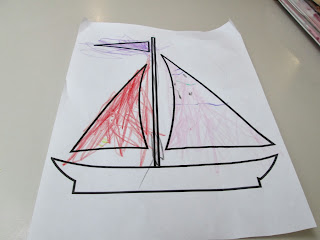 My favorite fastest shoes (color identification song using cut out shoes)
I was walking along the street one day (march)
With my knees up high, can you walk this way?
But I stepped in something. What should I do?
My favorite, fastest shoes have turned the color blue!

I was hopping along the street one day (hop)
On just one foot, can you hop this way?
But I hopped in something. I'm filled with dread.
My favorite, fastest shoes have turned the color red!

I was twirling along the street one day (twirl)
Around and around, can you twirl this way?
But I twirled in something. I'm not a happy fellow.
My favorite, fastest shoes have turned the color yellow!

I tiptoed along the street one day. (tiptoe)
Way up on my toes, can you tiptoe this way?
But I tiptoed in something. I'm about to make a scene!
My favorite, fastest shoes have turned the color green!

I stood still on the street one day (stand in place)
With my feet like this, can you stand this way?
I stepped in nothing, but this isn't very fun.
My shoes are meant to run, run, run! (run)

Countdown until there are no footballs left.

Sing "Take me out to the ballgame"

Literacy tip of the week: In school your child will be asked to make connections between similar stories and books. If a book you read to your child is similar to one you have already read with them, make sure to point this out. Ask them some simple questions about how the books are alike or different. One of the books we read this week, "Goodnight Baseball" is very similar to the classic "Goodnight Moon", so it provides a great example of this.

Craft:
We decorated our football pictures with torn paper :) 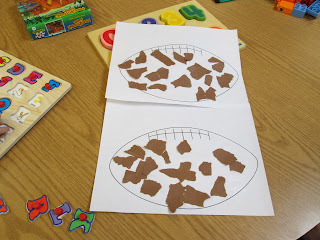 I am so glad storytime is back after our August break :) This week's theme is "All About Me".


The books read:
The Things I can Do by Jeff Mack
I Like Me by Nancy Carlson

Other book suggestions:
I'm Gonna Like Me by Jamie Lee Curtis
I'm Me by Sara Sheridan


Note: Songs like these are great for developing motor skills, and for teaching identification of body parts.
I can!
Chanting "I can" followed by having the children repeat different actions. (ex. Running, Jumping, Spinning, Stomping Feet, Clapping Hands)

If you're happy and you know it


Literacy Tip of the Week: When reading stories like "The Things I can Do", where the pictures don't match with the text is saying, make sure to point out the differences to your child as you read. In school they will be asked to think about choices authors have made to tell their stories, and these differences are one type of choice made by the author.

Craft:
We made pictures of ourselves with yarn and crayon :) 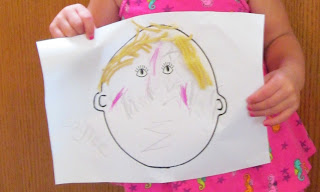 Check out our library website for more information on our children's programs!